John James Derkits, Jr. passed away on October 5, 2021 at the age of 79.  His parents were John James Derkits, native of Austria and Beatrice Thomas Derkits, native of Wales.  He was born on November 20, 1941 in Mobile, Alabama.  His school years were spent at University Military Schools in Mobile.  John graduated from the University of Florida where he earned a degree in Forestry.  Everyone knew he was a loyal Gator fan.

His entire career was in Forestry.  He worked for Georgia Kraft in Rome, Georgia.  A position with Kirby Lumber Company brought him to Silsbee, Texas in 1973.  He worked for Louisiana Pacific and then he was with Temple Inland in Silsbee and Jasper until his retirement in 2005.

He met his wife, Bonnie at the University of Florida.  They have been married for almost 60 years.  He loved his family so much.

He is survived by his children, Alyson Donalson and husband Drew of Silsbee, TX, Gretchen Woodard and husband Bobby of Silsbee, Janna Cormier and husband James of Austin, TX,  Cecilia Allen and husband Brad of Martindale, TX and John James Derkits, III and wife Laura of Port Aransas, TX.  He was devoted to his 15 wonderful grandchildren and his 6 adorable great-granddaughters.

He was preceded in death by his parents and his two beautiful granddaughters, Beatrice Camille Cormier and Erin Caroline Donalson.

John and Bonnie spent summers at their home in Balsam, NC, a very special place in the Smokey Mountains of Western North Carolina.  Favorite activities of his included sailing, hunting, grilling and fun times with family and friends.

John was very dedicated to his church, St. John’s Episcopal Church in Silsbee, TX and held numerous positions in the church in his 48 years of membership. 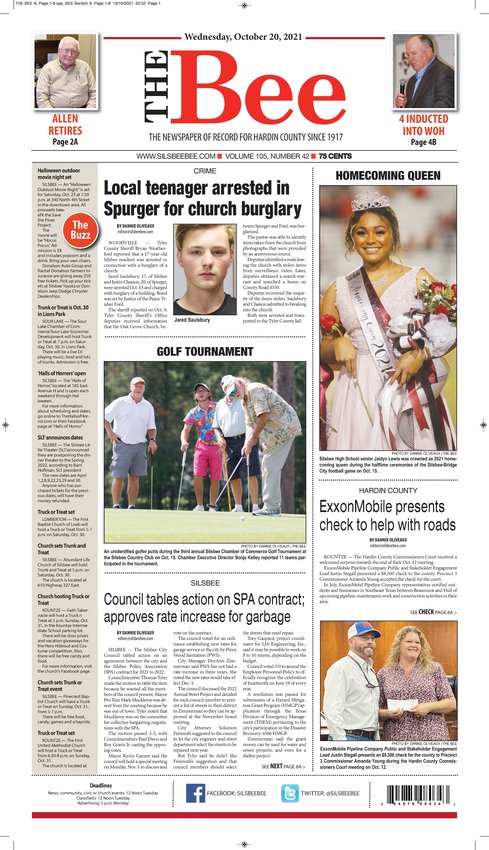 KOUNTZE — For most of his life, Dennis Allen has served the public through law enforcement. And after 52 years, he has decided to retire. Allen, currently a major with the Hardin County …

Texas Farm Credit launches programs to award $100,000 to ag students ROBSTOWN – Texas Farm Credit is relaunching its updated student programs to include more opportunities and increased award amounts totaling $100,000 for 4-H and FFA students within its service …
Crime Victims’ Assistance Center here to help KOUNTZE — For some, the Hardin County Crime Victims’ Assistance Center (HCCVAC) has provided help and assistance for people who have been the victim of a crime. But there are a lot of …
Bush announces 2021 ‘Save Texas History Essay Contest’ AUSTIN— Texas Land Commissioner George P. Bush announced the kickoff of the 2021 Save Texas History Essay Contest for fourth and sevent grade students. The statewide contest …
Hardin County
ExxonMobile presents check to help with roads KOUNTZE — The Hardin County Commissioners Court received a welcomed surprise towards the end of their Oct. 12 meeting. ExxonMobile Pipeline Company Public and Stakeholder Engagement Lead …

Claudine Watts Droddy, 81, of Kountze, passed away Friday, October 15, 2021. She was born in Silsbee to Hubert Watts and Lulu Mae Watts. Funeral service was at 2 p.m. today (Wednesday, October 20) …

Jonathan Ford Bickham was born December 9, 1972 in Orange, Texas and passed away October 13, 2021 in Beaumont, Texas.  He was a resident of Silsbee and a member of The First United Methodist …